For the past several years, a group from St. Paul’s has traveled to Nicaragua  with El Porvenir to work on various projects.  Each year, upon their return, they come back and recount their experience.  We’ve heard from seasoned veterans, newcomers and the youth.  But this year, we decided to do something different, this year, we are bringing back not our experience, but the experiences of the people we met.

Today, you get to meet some of the incredible people we got to meet this year and hear their stories.

To set the stage a bit, let me tell you about where we were.  We returned to the town of El Sauce this year.  It’s a town of about 30,000 people.  Within El Sauce, there are smaller communities, called “shires”.  A shire is a rural part of the town.  We worked in the shire of San Ramon, which was comprised of about 10 families – most of them related. 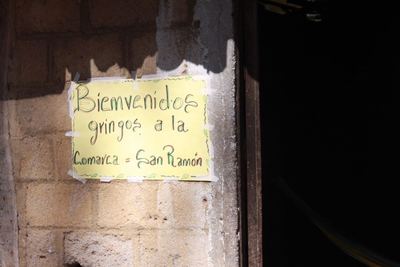 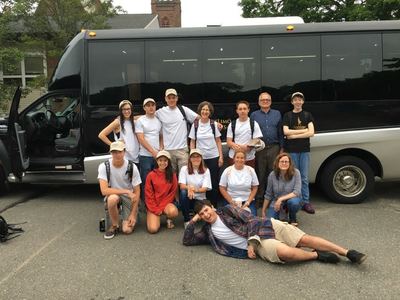 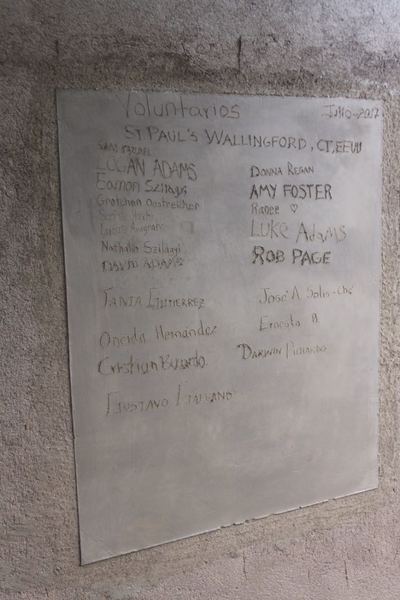 Our project was to build a bathing house / washing station and to dig a hole.  A big hole.  The hole is actually a dry well where the dirty water from the bathing station is deposited.  I think I can speak for the entire group when I say the dirt of Nicaragua is some of the toughest dirt there is.  And there a lot of rocks.  Heavy ones.  We were supposed to dig a hole 6 feet deep, we only managed to get to 4 before having to leave.

But that’s the beauty of the El Porvenir program.  The community works alongside of us and completes the project.  We did get most of the bathing station done and the lid for the dry well.
​ 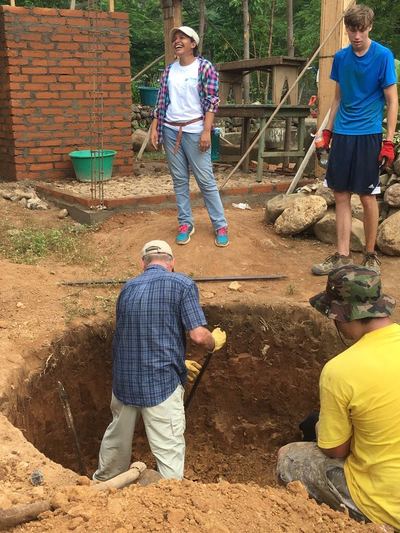 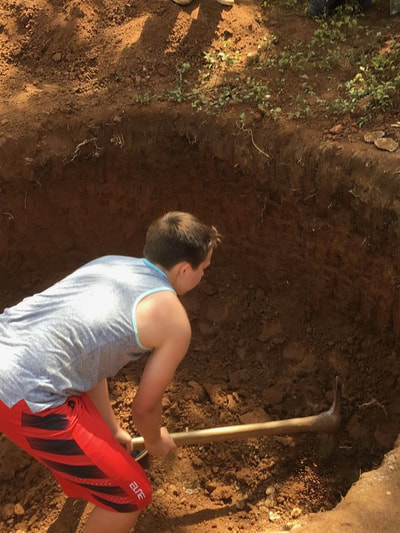 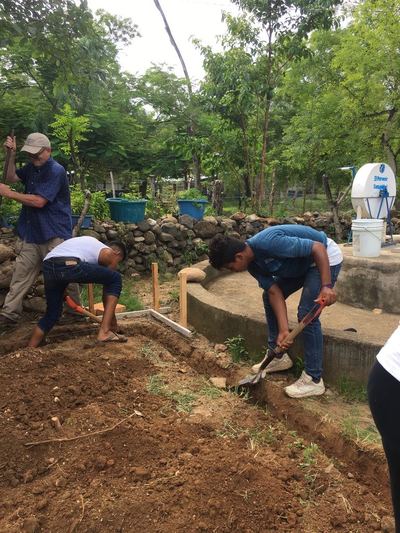 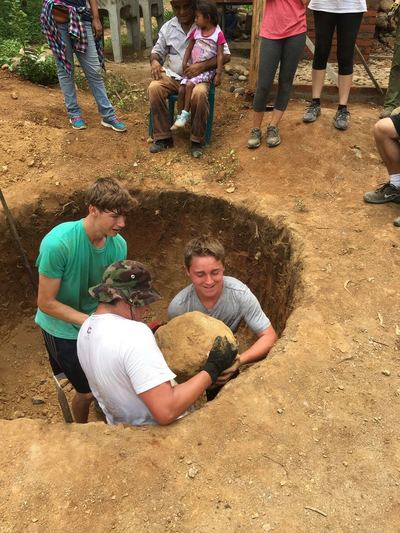 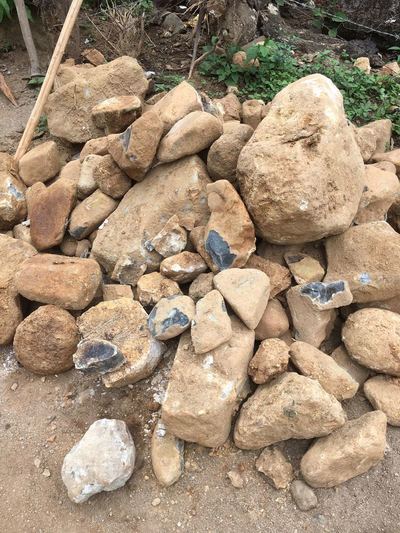 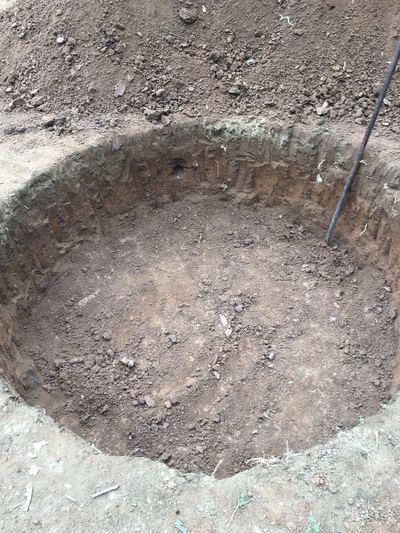 Tania and Jose spent every moment with the 14 of us. From our first step off the airplane until they dropped us off 7 days later at the gate. They both were the kindest, smartest, and bravest people we had met.  They fed us amazing food, taught us about their culture, and always made sure we were safe. One particular thing I will remember about Tania,  is she made sure we were never uncomfortable with the language barrier. There were times that I took a break from work to get  water and happened to stand near her and the members of the shire, she would immediately translate  and bring me up to speed on their conversation. She was always honest with my questions about etiquette and the culture of Nicaragua. There were nights we wanted ice cream after dinner, and I’m sure she wanted to just relax after working all day, but instead would walk us to the ice cream parlor just to make sure we didn’t have any questions about paying or get lost. I was impressed with them every single day. When sharing my experience with my parents, my Mom asked if I ever felt unsafe or scared, and I can honestly say that I never felt that way for 1 second and I truly believe it was because of the professionalism, knowledge, and care that these 2 provided.
​ 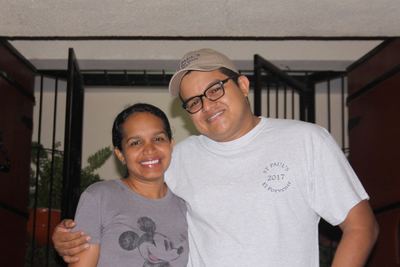 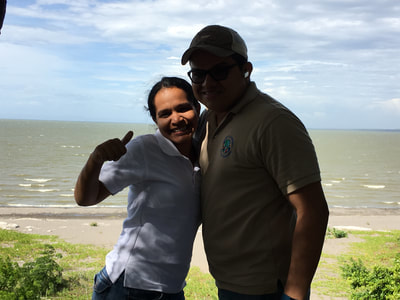 This is Ernesto.  His whole name is Bismark Ernesto Betancourt but he said if you call him Bismark, he may not answer since everyone calls him Ernesto.  Ernesto was the foreman of the project.  El Porvenir hires local tradesmen to lead the projects.  While he’s not from the shire of San Ramon, he is from El Sauce. 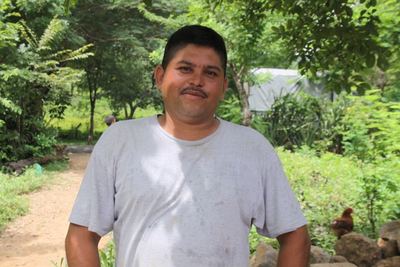 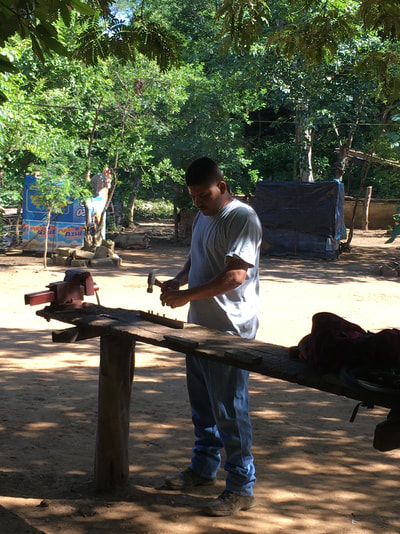 Ernesto didn’t speak any English and we spoke almost no Spanish so we relied on the talents of our translator to help us.  Ernesto said that working with us was a different experience for him.  He typically works in housing construction but has worked with El Porvenir on other projects.  He would have liked to have been able to speak with us more fluently.  He enjoys working side by side with the people in the communities.  It’s also easier to communicate when he understands the people he’s working with.  Thank goodness for Tania, our translator to help us with the instructions.

Ernesto was an extremely patient guy.  While Dave was our most experienced brick-layer, his skills paled in comparison to Ernesto.  While we spent an entire day laying bricks, row by row – Ernesto patiently watched pointing to the bricks we should use or when a row was uneven.  We left in the early evening, proud of the 10 or so rows we put up.  The next morning, Ernesto was already hard at work when we arrived and had already doubled the number of rows! 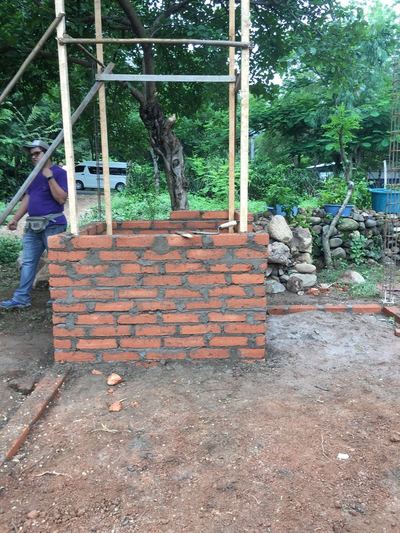 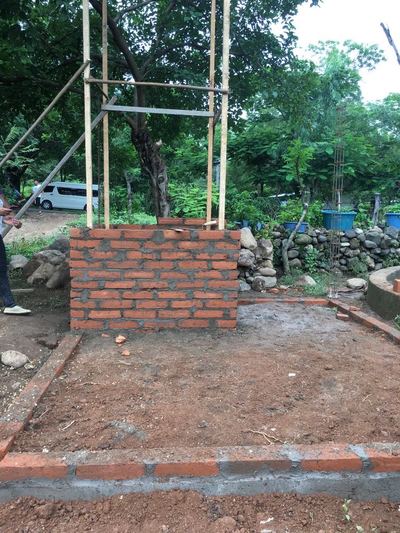 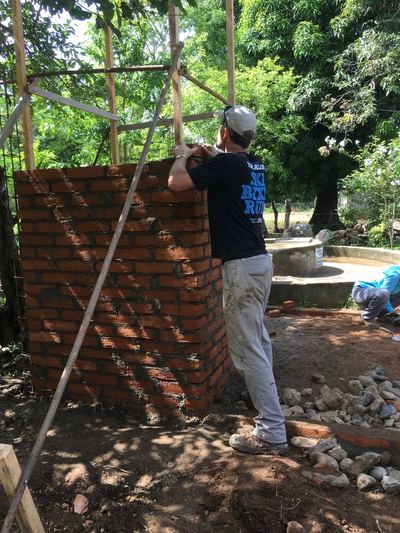 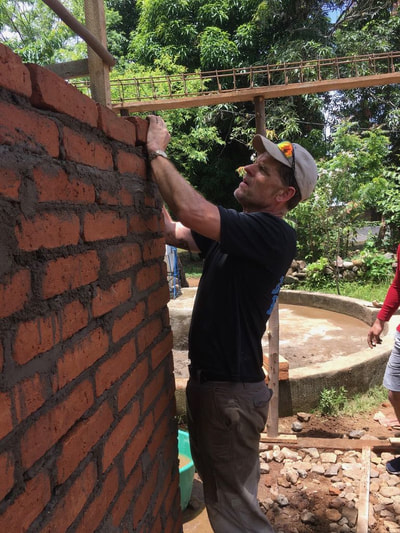 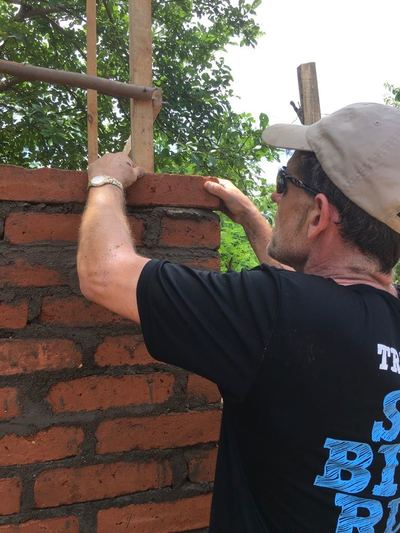 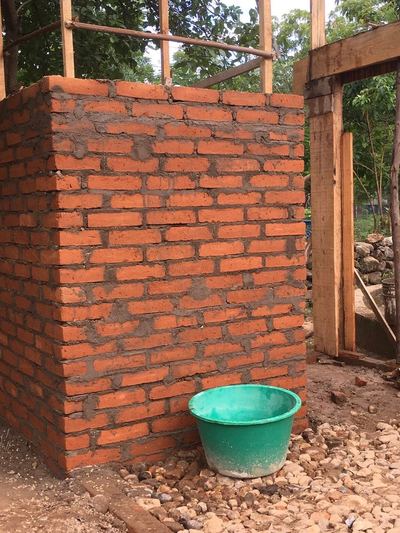 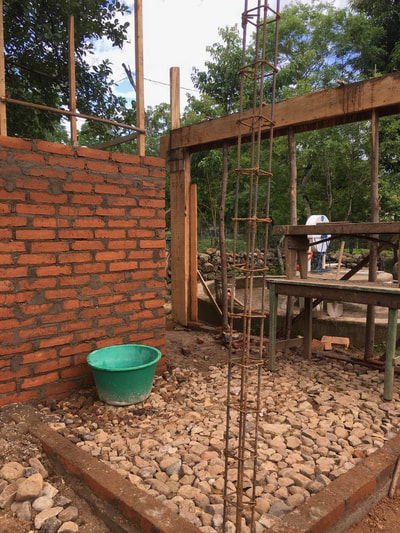 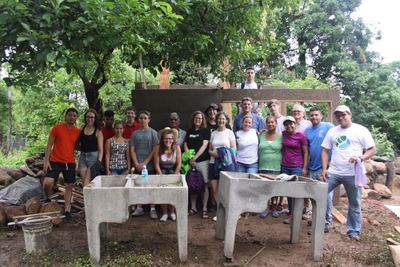 When I asked Ernesto about how life has changed from when he was young, he said life was much simpler then.  Growing up, he had only 1 pair of shoes and was happy with those.  Now, there’s so much more stuff and trends.  He feels he and his family need to keep up with those trends.  He enjoyed and misses the simplicity of his childhood. 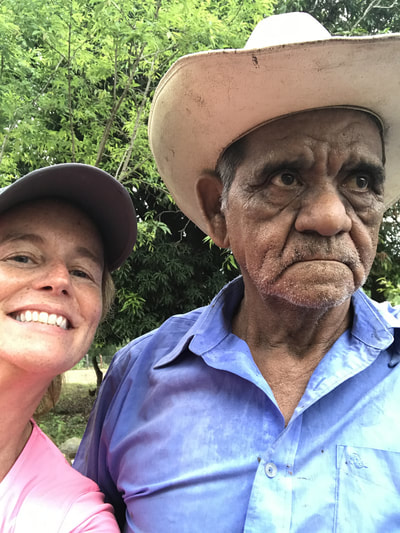 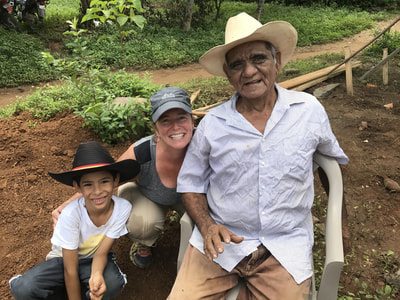 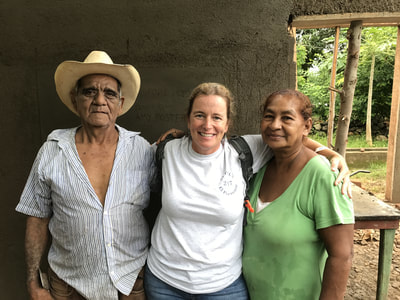 Gustavo Galeano, also known as Don Gustavo. Affectionately known by myself and some of the others in our group as “Papi”. The first day on site, I was immediately drawn to this man. He had a look in his eyes, and a expression on his face that reminded me of someone from home. He looked aged and weathered but also as if he wanted to tackle the entire job himself. I gravitated towards him because I knew he wanted to do it all, but I already felt like I wanted to protect him and didn’t want to allow his frail body to exhaust himself.

Mr Gustavo is 73 years old. He grew up in a family with 17 brothers and sisters.  He was born and lived his entire life in El Sauce. For the last 40 years he has lived in this particular shire.

When fighting in the war, he was shot and injured. When he came home, he worked with cattle as a “campisto”, married and had 6 children. 1 of his sons was drafted  to the Contra war at the age of 15 and unfortunately was killed serving at the age of 17.

Papi owns the land and has divided it up and given it to his sons.  They all work in construction, so we weren’t able to meet them when we were there. We did meet several of his 20 grandchildren, some of them working alongside us while the younger ones played with the animals or helped in the kitchen.

Kevin, his 19 year old grandson works during the week and goes to the university in Leon on Saturdays to study economics.

Everyday I made many attempts to watch and assist this man. He was 73 but was very capable of physical labor. There were many moments that his strength had all of us in awe.  He taught me so much about construction and yet he never spoke a work of English and I never spoke a word of Spanish.  Papi  was a mentor  and as you can see, he warmed up to me and we became  friends.

At the end of our stay, I brought Tania over to Papi and asked her to interpret something for me. I wanted to know if there was anything about our project that could have been done differently? Maybe more efficient or just a little better? I understand do it yourselfers, like my husband, always looks at a job they have done  and think “that could be straighter” or “ that is a little off”. I waited quietly for her to speak to him and explain  my question and then he replied “Nothing could be different, it is all perfect!”
​ 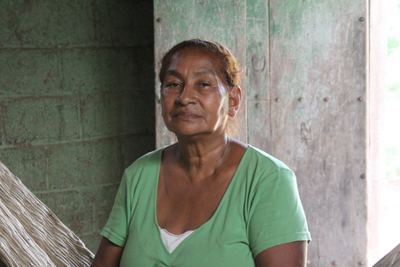 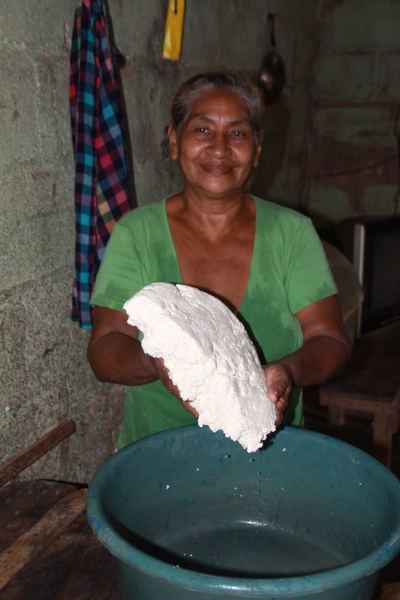 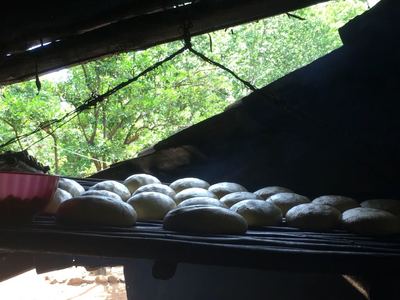 This is Irina Bucardo.  She’s Don Gustavo’s  wife.  The matriarch of the family.  She’s lived in San Ramon for over 40 years.  She was born in the shire of St. Nicholas.  Her father was working with the cattle there on the same farm as Don Gustavo.  That’s how she met her future husband, at the age of 16.

When I was in the kitchen of their home (not a kitchen like we are used too – it’s outdoors, with a metal roof and log walls), I noticed something being smoked above the open stove.  I thought it was bread but found out it was cheese that they sell in town.  Later that afternoon, Irina and her daughter invited me inside to show me how they make the cheese.  The cheese is called “cuajada”.  They purchase the milk from a local farmer because they don’t have a cow.  They make cheese, cream and butter.  I asked them how they make the butter, thinking of an old fashioned butter churner like at Old Sturbridge Village.  They laughed and said “a blender”.

When I asked Irina what it meant for her to have a washing station, she said it was a blessing for her, her children and her grandchildren.  Growing up, she didn’t have a bathing station.  She didn’t even have a well.  She got water from the river.  She’s been waiting for over 40 years for a bathing station.

I asked her what made her happy about living in San Ramon.  She said she likes being close to her grandchildren.  Her friends have told her she should move to a nicer area but she enjoys being near her family.  She has more of a reason to stay now that, in her words, “the brothers and sisters from the US”, came to help their community.

Irina is a humble woman.  She was a bit shy at times but very proud.  She was nervous when being interviewed on camera.  But when it came time for us to leave, it was Irina who stood up to thank us and tell us how much this project meant to the community. 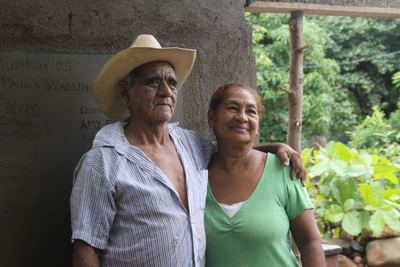 These were only a few of the people we met.  There were so many more.  From the shopkeepers where we bought the supplies, to the children playing soccer, to the owner of the hotel, to the staff from El Porvenir.  When I asked the group how this year compared to last, one of the biggest differences was the people we met.  While the school project from last year was fulfilling, there was less interaction with the community.  This year, we worked alongside the community, ate with them, watched them interact with their families -- got to know them.  For a few days, they welcomed us into their lives and it was an honor and privilege to have met them.

We heard from the community over and over again how grateful they were for our help and generosity and how they truly felt blessed by our presence.  I think I can speak on behalf of the entire group when I say that the feeling was mutual.  Personally, I feel I received more from them.  The knowledge, the generosity and the comradery they gave me are true blessings.  I look forward to going next year and having another adventure.

Would everyone who was on the trip this past summer please stand?

On behalf of this group, we want to thank you, the parishioners of St. Paul’s, for your support.  Without your support, would not have been able to meet these amazing people.

Next year, please join us.

Check out this video by Luke Adams Productions of our most recent trip
to Nicaragua where we built latrines for a school in El Sauce.